For anyone interested in the long-term investment outlook for fixed income, or more simply the future of our current sovereign nation states, an understanding of government debt must be a key element. Much is written on this subject but I find a lot of it confusing with partisan politics dominating analytical perspectives and terminology which is often inconsistent and emotive.

In this note, I want to focus on episodes where large debt level has been managed.
The large debts of WW1 and the Great Depression were reduced, on the whole, by various types of default. These always come with large economic costs and are to be avoided.
The period after WW2 is more interesting, commonly used as evidence as grounds for optimism and as grounds for opposing “austerity”. (in quotes as this term is generally emotively used by the opponents of current fiscal policy and has a pretty loose definition and usage)

(This paper by Reinhart and Sbrancia does a nice job of laying out the economic history. https://www.imf.org/external/np/seminars/eng/2011/res2/pdf/crbs.pdf)

So, I thought I would start by making a simple framework within which I can look at debt dynamics. Breaking down the change in government debt into 2 parts:

Note, this is not intended to be a complete model as there are clearly other factors which can change the debt level. For example

But it is pretty decent and captures the vast majority of the debt dynamics, certainly all of the ones which drive long-term trends.

Here is the model vs actual data since WW2 for the UK. 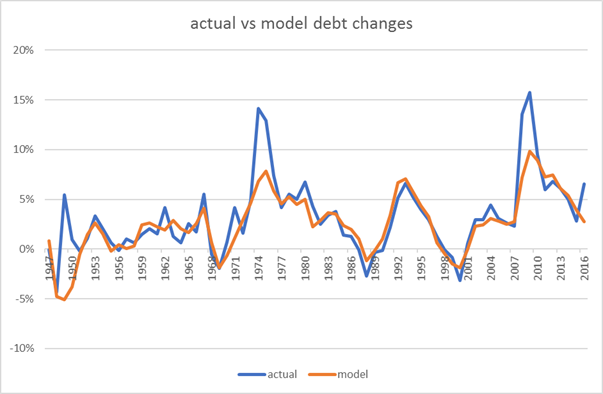 There are two clear episodes (~1974 and ~2008) when the actual increase in government debt were far larger than the model would suggest. It would be nice to understand what drove it (for example, in the financial crisis, did the government balance sheet absorb private sector banking debt without having it showing up in the deficit?)

Below is the chart of UK debt since WW2 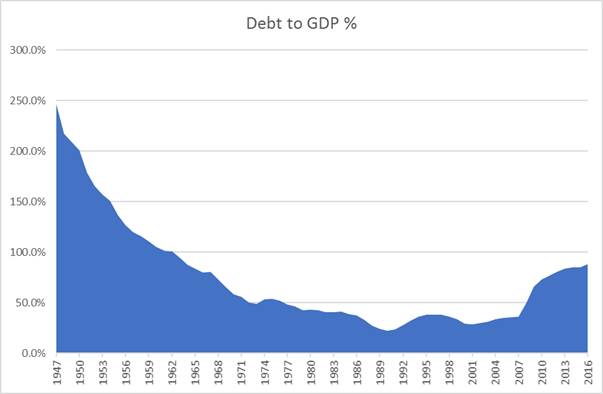 It is commonly described that the UK ran deficits thought this period and the debt level was brought down by high growth. This is not incorrect but I find it a bit narrow and misleading.

First, the idea that the UK ran deficits. Well it is true but if you split the deficit into primary surplus/deficit and interest payments then the picture looks quite different. 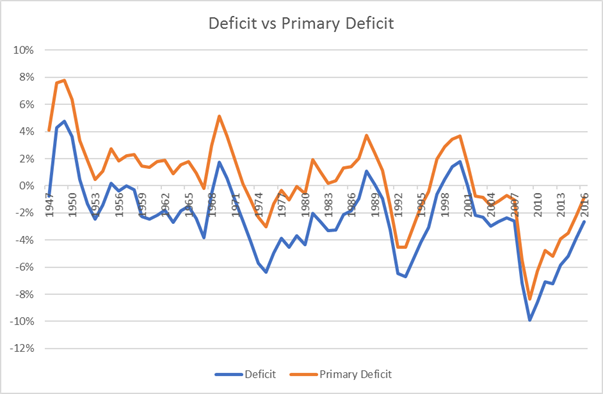 Whilst it is true that the main way the UK brought down its debts level was running nominal GDP at a higher rate than the interest rate paid on its debt, compounding effects are huge (running this for a long time) particularly when the debt level is large.

Between 1947 and 1951, debt levels fell from 246% to 165% of GDP. The cumulative primary surplus over that period was 29%, so the balance, about 2/3, of fall in level came from the impact of nominal GDP vs the rate on the debt. compared with only 1/3 from running large primary surpluses. 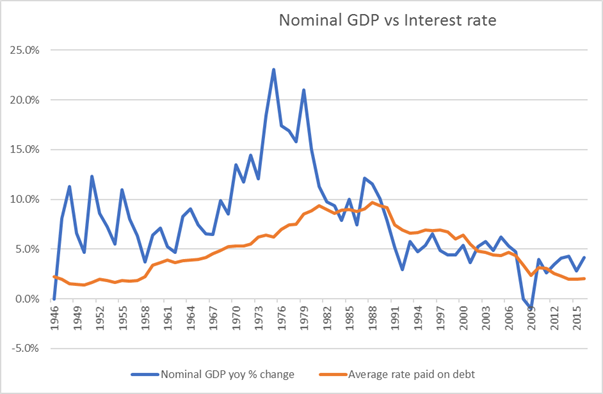 Relevance to the present

How did the UK manage to keep its rates so far below nominal GDP?
Should we expect to be able to do the same in the future?

The advice I always give to my analyst team is to send their work BEFORE they had completely finished it, especially before they have polished it. I want to see the spreadsheets, their workings and their ideas before they had settled on an answer.

The advantages of sharing early

If I get the final product later

In the context of my previous piece on writing, I like work where there is an active response but no evaluation or criticism from allies and peers (middle-centre box in the grid); not a piece that has been written for evaluation by the boss (top-right box). I understand that this may not be standard, in fact it is the cultural opposite to how Ray Dalio describes Bridgewater in his “Principles”. This perhaps shows that many different approaches can be successful but it is important to know which one works for you and make sure you stick to it.

In this blog, I will try to follow my own advice. The posts may not be analytically perfect, well-footnoted or accurately referenced. The views presented will be ones that are liable to refinement and even complete reversal as more information and better analysis is included.

I hope this does not turn out like Charles Foster Kane’s Declaration of Principles.

The idea for this blog came from reading a book recently which had a profound impact on me. “Everyone Can Write” by Peter Elbow,

Written by a noted English professor, well known for developing new ideas in teaching creative writing, many of which have become very influential. I realised that whilst his theories were focused on the writing process, they were far more generally applicable to any area of creativity.

But for now, I will explain how it led me to write this blog and why I am writing in this way.

What type of audience?

He starts by describing his personal journey from a high-performing student to dropping out of a PhD with writer’s block. He suggests this results from the fact the “audience and expected response have a huge influence on the experience of writing”. He provides the below grid which I have partially filled with my own experience.

The experience of writing as a student is overwhelmingly in the top right box (e.g. writing essays to be marked by a teacher). Attributes that are valued are primarily from conforming to the expectations of the audience – accuracy and precision is far more important than creativity. In truth, creativity is often discouraged because the student’s role is to regurgitate the ideas of others with sufficient deference, whilst changing the words enough so that it is not plagiarism. Perhaps this is why I always disliked writing essays so much! I would really enjoy doing all the reading, making notes and discussing ideas; but found the task of writing the essay rather painful and one to be avoided if at all possible.

Since leaving education, most of my writing has been to allies and pain-free. When I started writing investor letters and presentations in 2005, I found the experience quite enjoyable and the discipline of having to convey my thoughts on a regular and timely basis was useful. However the fund grew as did the number of investors, so that my letters were being read by hundreds of people and I became increasingly aware that I was being evaluated. To be fair, much of this evaluation was positive. Many people would compliment my letters and say how useful they found them, but even positive evaluation is evaluation. Of course, not all evaluations were positive! I would frequently have to defend my words in investor meetings.

What I found was that over time my writing became safer, less creative and more formulaic; it also went from being an enjoyable task to an unpleasant yet necessary one. This chimed with the journey that Peter Elbow described. I found his solution to the problem inspirational; how he managed to return to academia and indeed become a world-renowned teacher. He found he could only write if his first draft was deliberately “garbage” or rather free, engaging his creative mind and turning off his analytical mind. To this end, he pioneered “free-writing” which is spending 10 minutes writing continuously anything that comes into your head. The only rule is that you have to write continuously. This is what I am in the middle of right now….

For years, many friends and colleagues have encouraged me to write a book. Feeling this is a top-right corner activity, I want it to be “good” and since I have no confidence that my book would be any good, it is impossible to even begin.
A blog is different – frankly most are terrible – and no-one seems to mind!
I am trying to write this pretty much as free-writing
i.e. no planning, very limited editing, just writing thoughts that occur to me and only sharing with encouraging friends.

Perhaps one day, I will share this blog more widely but if I do, I must remind myself of the dangers. That top-right box is a pretty hard place to be. I have much respect for blogs like https://mainlymacro.blogspot.co.uk/ which manage to be well-written, informative and accessible to a broad audience. My experience of most other blogs is that they are not interesting, and further that they retreat into purely writing for allies, in more recent terms for their own “bubble”. For example, investment blogs written by pro or anti-government interventionists may write pieces which are intermittently incoherent. However since they are only being read and responded to by fellow believers, the only evaluation they receive is either wildly and blindly supportive, or from a non-believer who can be dismissed a priori.

I would like to write on ideas from a broad range of topics that I find interesting. Commonly areas where I think there is another way to address the problem or where the public debate lacks a coherent framework in which it can be discussed.