I have been pondering in what sense does Brexit affect UK sovereignty. In simple terms, the UK’s sovereignty is unchanged. The UK has the right to leave the EU, therefore it has independent authority whether it chooses to use it or not.

Wikipedia defines Sovereignty as the “power of a governing body over itself, without any interference from outside sources or bodies.” This suggests that we need to consider degrees of power, and this takes us rapidly beyond the simple terms above.

In one regard, the definition above suggests leaving the EU would clearly increase the UK’s sovereignty. Currently there is a lot of interference from EU bodies that a Hard Brexit would remove.

Sovereignty – to give it away or to exercise it?

Another way to think about degrees of power is to consider effectiveness i.e. the power to do or get things you want. While a country might claim theoretical power to do anything it wants to, in practice all countries enter in binding agreements with other countries which put constraints on some behaviour in return for other benefits. For example, a trade treaty creates easier trade once you agree to certain standards, or joining NATO because you care about your economy and your security. In this way, you exercise your sovereignty, giving up some of your autonomy in exchange for a benefit you value more highly. To use an analogy to the individual: you lose autonomy by having a job (you have a boss and you have to go to work) but you gain power to do what you want by having money.

Relative power therefore, is an important determinant of the effective sovereignty of a country.
If you are very powerful compared to another country, then a treaty you enter into will likely be better suited to your preferences than to theirs. Whilst superpowers and small states are both sovereign, in practice the superpower gets to set the terms a lot more often.

Smaller states can change this is by clubbing together: finding like-minded states, forming coalitions, standing up to larger powers by, in effect, acting like a large power themselves. If your internal values and goals are similar, then the loss of independence is more than made up for by the increase in power you gain. Thus, the EU is a greater global power than any of its constituent countries. The US, when thought of as constituent states, is similar. Under this approach, you could even suggest “sovereignty” has been increased by pooling it, rather than diminished.

And finally back to Brexit….

The question for the UK is whether it had more effective sovereignty by pooling its sovereignty within the EU or by going it alone. This is a way to think about why people voted the way they did.

For people older than me, my guess is that they do not feel an affinity with continental Europe let alone its values, and at same time retain clear memories of when Britain was a significant global power.

For people younger than me, there is a much greater affinity for European culture and values, and a very limited sense that the UK is an important independent state if it were alone on the global stage.

Thus, one group sees a freedom from EU control, and with that an ability for the UK to use its power without restraint. The other sees a separation from modern liberal values, towards political extremism and a rapid decline in economic and political power.

I outlined my thoughts on the progress in Brexit discussions back in August (“Brexit means no Brexit!”), at a time when the UK government was attempting to give energy to the talks, already appearing to stall. May’s speech this week, again an attempt to break the deadlock, largely confirmed these opinions i.e. we still have no proposal on either Ireland or financial obligations and we prefer not to talk about them. The Conservatives are united around holding out for an impossible deal, Labour has united around agreeing not to talk about Brexit.

The UK media, on the other hand, seems to create a false impression that progress is being made, for example with talk of “concessions”. It is indeed a concession for the UK to ask for a 2-year transition, but not, as often misleadingly reported, a concession of the UK to the EU. It is a concession between different squabbling wings of the UK government, with the hardliners eventually agreeing to it. The UK media also present this transition deal as certain to happen i.e. the views of the EU are presumed to be irrelevant. These “concessions” are better thought of as the continuing struggle for the UK government to work out its opening negotiating position. This further support my views in the previous post that we have made very little progress.

I have spent some time thinking about what the outcome of these negotiations will be. I see 3 broad possibilities:

Let’s think about the UK’s view on these possible outcomes:

And the EU view:

Does the EU even want a bespoke deal?

The evidence so far suggests the answer is a clear no. Statements from the major EU politicians have been entirely consistent i.e. for free market access to EU markets, you need to abide by EU rules (freedom of movement and oversight by the ECJ)

But in negotiations words are cheap, so let’s look at the EU’s behaviour. If the EU wanted a bespoke deal, it would share in the UK’s anxiety to get moving on talks now, as any delay adds to the risk that a complicated deal will not be made. However, they seem not to be in a hurry at all, happy to have negotiations sit where they are. It also implies that even if the UK makes an agreement on the EU’s
three red lines, they will be sorely disappointed by what the EU puts on the table next.

Which is better? No Deal or a Bad Deal?

May initially declared that the UK would prefer “No Deal”. But after the general election result,
it’s clear that only the hard line Brexiteers really believe that. At least in the UK….

I think it might be the case for the EU however. A bespoke deal is a nightmare for them. It would threaten the integrity of the Single Market, the political concept of the EU and be a loss of sovereignty. Why would the EU agree to have regulation done in partnership with the UK? Surely, they will just do their own regulation and if the UK wants to freely access the EU market, then the UK can agree to subordinate its regulation to the EU.

This brings us back to transition periods. In my previous post, I described how the EU and the UK think differently about transition. For the EU, it is a bridge between the current situation and a known destination. For the UK, it is a lifeboat while you work out where you want to go.

I previously suggested this made a transition period highly unlikely, but I had not considered another option, a transition with virtually nothing changing. This seems highly likely to me as it would suit both sides. The UK will legally have left the EU, with no option to change its mind, thus pleasing the hardcore Brexiteers. For the EU, the UK would then have even less negotiating leverage. The UK can either stay as an EU satellite state or leave as it chooses.

The UK desperately wants a bespoke deal. Ideally a favourable one but anything that is better than the economic disaster of Hard Brexit and the political disaster of Soft Brexit. Desirability bias (“Desire – The Fatal Flaw”) makes the UK think a good deal is likely. But the EU is not cooperating, which leads me to believe that it has no interest in any such deal. I think that the EU may offer the UK a choice between Hard Brexit or abiding by all the rules without a seat at the table.

On May 30th I wrote a post explaining why I was bearish the USD (Framework for FX valuation – where is the USD heading?). Value seemed to me to be the most important driver and so I had paired a short USD view against a basket of currencies which I considered the most undervalued i.e. CAD, AUD, EUR, NOK and SEK.

This has been working very well so far. 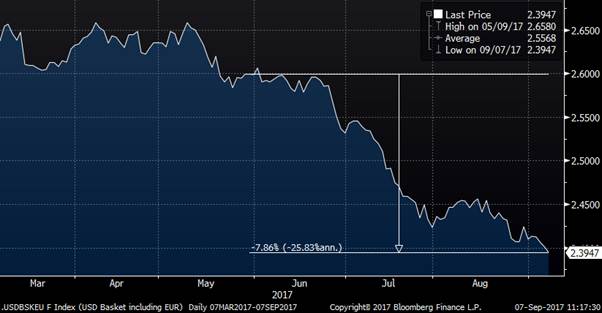 However currently I do not think the USD has moved enough to warrant a reduction in my conviction level, as the long-term potential for the move is still far greater. 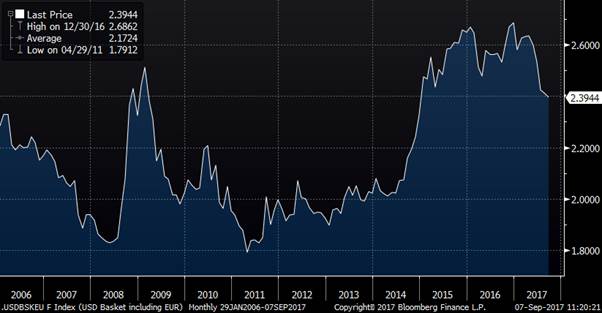 I have been very bearish on sterling for a long time. I may write a post explaining the key reasons in more detail, but essentially I see GBP as highly vulnerable for many fundamental reasons and it is heading towards a large negative trade shock with Brexit. This results in a heightened potential for a calamitous drop.

My 5th May post (Who loses more from Brexit? The UK or EU?) is where I laid out why the UK has far more to lose then the EU from Brexit. Since then sterling has performed very poorly vs. my basket of undervalued currencies (AUD, EUR, CAD, NOK and SEK.) 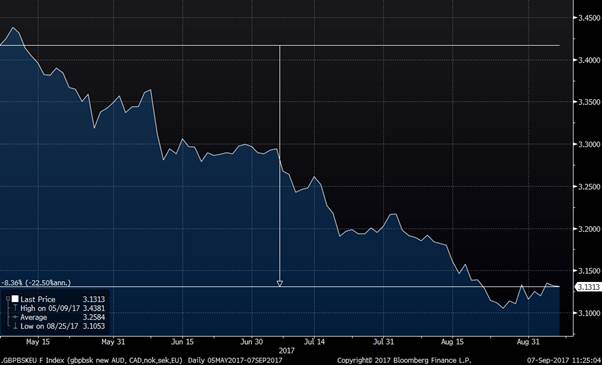 I retain my bearish view of the currency but am aware that it is hard to justify looking solely at historic value. My view for continued weakness rests on my view that Brexit will happen and very bad economic consequences will follow.

If there is a political earthquake leading to a U-turn, or perhaps the UK ends up in some permanent transition limbo within the single market, then I would revisit my view. 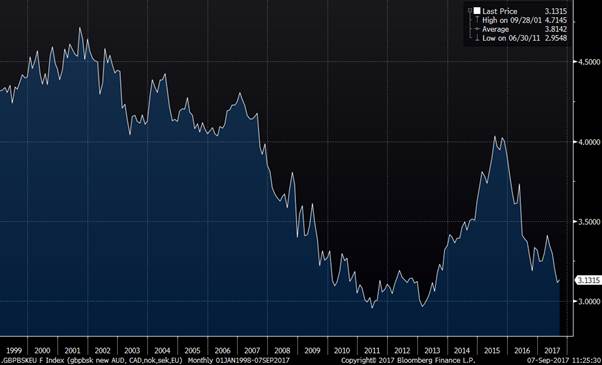 In early June I laid out why I was bearish on US equities. Since then they have barely moved. My views have not really changed but I intend to update my analysis given some interesting data releases since then. Most importantly wage growth has continued to disappoint which means that there remains an opportunity for corporate earnings to keep rising, despite lacklustre GDP growth. 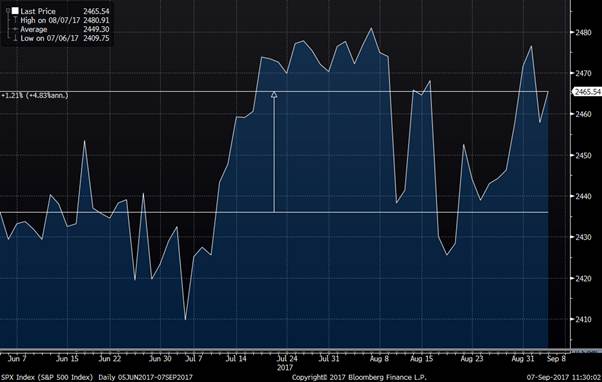 I looked at the front end of US fixed income on May 16th and noted that the continued slow drift lower in rates had been a good trade and that it could be about to change.

There has been no sign of a change at all in the market i.e. a very slow move to lower rates continues. This is not a trade I have any appetite to hold either side of. 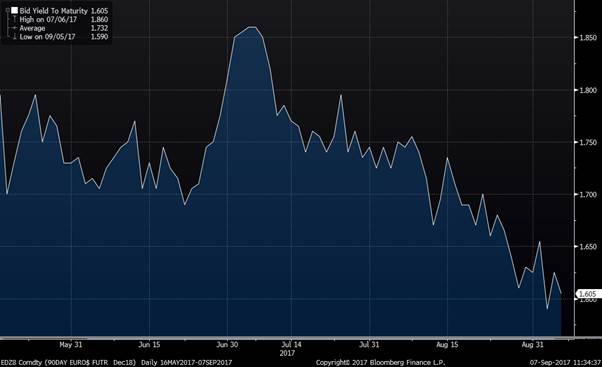 The story is similar in the long end with little movement in any direction.

With mediocre growth and no acceleration in wage growth, there is no catalyst but my concerns with overall valuation mean I have no desire to own any fixed income at these levels. 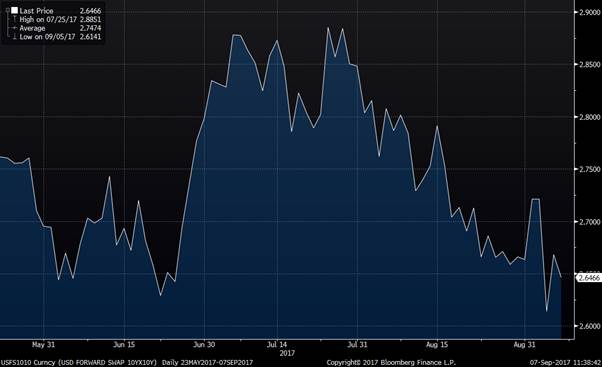