In the June 21st update, I showed a chart with the US states I was most concerned about. Florida, Texas and Arizona were showing worrying early signs of increases, while other states such as New York were keeping control of the virus. Since then the situation has developed as I feared. 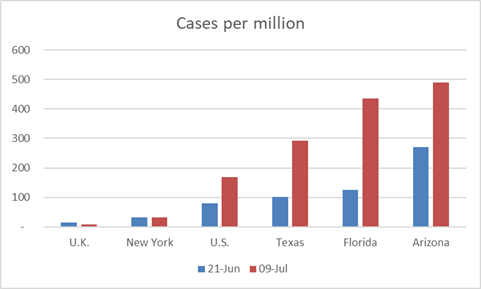 You could interpret this chart as the UK doing a good job and I would certainly agree it shows the positive effect of the lockdown, but I would also argue that this is a warning against complacency. Florida for example opened their bars in early June and 6 weeks later we can see the consequences.

Yet anti-lockdown commentators cite the lack of large increases in the number of deaths in these US states as a cause for celebration. During the outbreak in New York, deaths rose at the same time as positive case results as in the graph below. Some argue this shows the virus is different this time, perhaps less virulent, perhaps we know how to treat it now, maybe it’s less deadly during the summer. 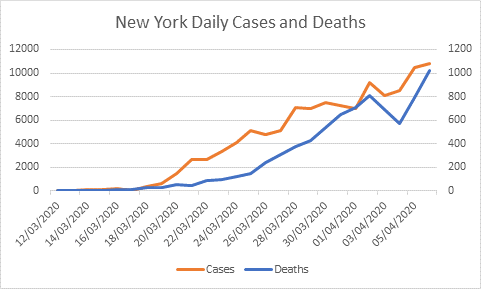 Unfortunately, this is mainly a misunderstanding of the statistics. The biggest reason deaths have not risen is that they have not risen yet. For an individual case, there is obviously a time period between getting infected with Covid, when you can test positive, and dying.

During the first outbreaks in London and New York, most tests were being done on people already very sick, perhaps on admission to hospital. Essentially, we only began to notice the virus once people were already dying. Without widespread testing across the community, we saw no lag between reported cases and deaths but given more comprehensive testing systems, I would expect this time difference to be larger now.

As cases in these problem states started to rise after June 21st i.e. 18 days ago. I would expect to see the death rate to start rising around now. Since this is the first time we have had significant test data in advance of the deaths it is not easy to make a confident projection. We do not know the lag we should use, we know positive tests but not the number of people infected who have not been tested and we do not know the mortality rate. Below I use a simple projection with a 2-week lag between positive tests and deaths, and a case mortality rate of 2% which is roughly what it was before the recent spike. In this projection we might expect deaths per day total in Arizona, Florida, and Texas to reach 400 per day in a couple of weeks’ time as in the chart below. 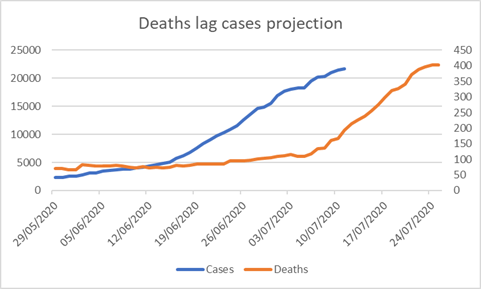 There may indeed be a lower mortality rate with improved treatments as we learn more about the disease. There is also a positive demographic effect in the short term as the recent cases have been concentrated in younger people who have a much lower mortality rate. This does not actually affect the overall mortality rate of course but it will make it look less deadly at first glance. If the death rate does not rise over the next few weeks, then I will revisit this debate to see if there is something new actually happening with Covid.

The political right has principally argued against lockdown on the grounds that it harms the economy. Sweden has often been the target of their praise, as an example of a country which took the sensible route and did not panic, allowing the economy to largely carry on as before with people staying safe by following common sense. We now have enough data to compare Sweden to similar countries with different policies.

Sweden did not have a formal lockdown but still saw a drop of 15% in card payments. It was notable that photos in the press often showed happy Swedes drinking in Stockholm, but even without a lockdown the data showed that people’s behaviour did indeed change with many scared to go to restaurants and shops.

Where the paths of the two economies have really diverged is in the aftermath.

Denmark with its early and strict lockdown was then able to be one of the earliest countries to relax measures. They have seen a virtually complete recovery in their economy with retail sales already above last year’s levels and even restaurants only 10% lower.

Sweden, by contrast, has seen very little bounce at all. This chart shows how household consumption is stuck around 10% below the levels of last year. 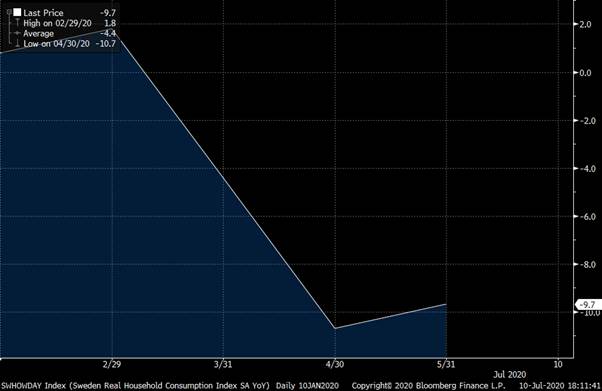 Credit card payments compared to last year also show a huge gulf between Sweden and its neighbours Denmark and Norway, as this chart from EVA https://www.eva.fi/en/ shows

The obvious conclusion is that the Swedish experiment has not only left them with ten times the deaths of their neighbours (and still rising), but also the continued high prevalence of the virus has left the population scared and lacking confidence to go about as before. Whilst their neighbours can relax and go back to normal, the Swedes are left in a perpetual semi-lockdown state.

As we look around the world, this is great news for countries that have pursued timely and effective lockdowns. It is not good news for the US which opened the economy without controlling the virus. The evidence from Sweden is that this will lead to a prolonged and deeper recession. For the UK, we are relying on Boris’ gamble that we will not see a resurgence of the virus despite our lack of a viable test and trace process.