As the Brexit deadlines approach, everything becomes more chaotic although nothing has really happened in the last 2 ½ years. The possible end points are still the same but if anything, the divisions among the electorate and MPs are even more entrenched; more information about what Brexit means has not led many to change their view. As a result, the UK continues to obsess about sideshows, such as votes of No Confidence, refusing to engage in the reality of Brexit and preferring to expend energy of infighting. We have seen that there is no clear mandate that can be given by the electorate. So, what do the politicians want and what will they do?

What are the options?

The path to May’s Deal is for Parliament to vote for it.

The path for No Deal is for nothing to happen i.e it’s the default option.

Tactics for each of the supporting groups

If you want No Deal, how can you get there?

No Deal would be overwhelming favourite, if it were not for the fact that the government and the vast majority of MPs are against it and only 25% of the electorate rate it as their preferred outcome! Which of course should rule it out but unfortunately does not.

If you want Remain

If you want May’s Deal

The appeal of this option to the pragmatists and risk mitigaters (i.e. make sure that their least preferred outcome is avoided) but remains unpopular to the extreme believers on each side. The tactics around this are rather interesting, given that Theresa May wants this outcome.

Which is most likely?

As the deadlines approach, I expect to see a lot of late stage drama which leads either to No Deal or May’s Deal. I believe that Remain is by far the least likely as it requires a few separate miracles. No Deal always stays on the cards as it is the default option.

For May’s Deal to prevail, I cannot see the English nationalist wing of the Conservatives making a compromise to secure Brexit- it is not in their political interest to compromise. They will do better with their supporters to be seen to have failed fighting to the end for No Deal than to have compromised.

This leaves the possibility that deal needs to attract cross-party support and gain the votes of Labour MPs. The recent move by Amber Rudd to coordinate a cross-party alliance to vote for some form of deal is an example:

Q: Why would Remainer Labour MPs vote for a Deal?

A: Rather than risk a No Deal Brexit and/or to avoid the wrath that comes with a referendum.

Problem: For the numbers this requires a large number of Labour MPs to vote for the Deal, against the wishes of their leader Corbyn and both their Brexiteer and Remainer constituents.

Q: Why would Brexiteer Labour MPs vote for a Deal?

A: The ultras may never agree to a compromise Brexit, but there are plenty of Brexit supporting Labour MPs who could. Remember that to the extent that Labour has a Brexit policy, it is to leave with a slightly softer version of May’s deal (permanent membership of the Customs Union rather than just as a backstop)

Problem: For the numbers this requires a large number of Labour MPs to vote for the Deal, against the wishes of their leader Corbyn and both their Brexiteer and Remainer constituents. (see above!)

How to make progress

What we see is that there will always be a clear majority against any of the options while there are so many of them. But if the number of options could be narrowed to two then we would see a majority, most likely for the Deal.
For example, if the choice were No Deal vs Deal then I am confident Deal wins. Also, if Deal vs Remain then I also think Deal wins.

If the choices cannot be narrowed to two, then perhaps we simply crash out without a deal.

In this post, I would like to move away from discussion of the rights and wrongs of Brexit but instead concentrate on what outcome people currently prefer. What would be the democratic solution?

This is a useful part of economic theory that does not get enough attention when discussing democracy. It may seem a little dry but please bear with me because it is very important.

A central concept in economics is preferences:

Given this, you would also expect that:

This is called having “transitive” preferences and is a key part of what economists mean for behaviour to be “rational”.

The Condorcet Paradox (https://en.wikipedia.org/wiki/Condorcet_paradox) shows that even if individuals within a group have transitive preferences, the group as measured by majority preference may not have.

In the example above

It is entirely possible and logical, even though its it rather counter-intuitive.

For the main groups within the population, let’s imagine 1st, 2nd and 3rd preferences for the various outcomes in the below table:

In my imagined universe:

Now let’s have a contest and see who wins if we ran a Referendum on each pair of outcomes:

In this case, the overall population makes these choices:

You may think therefore that Remain is preferred to No Deal but this is not the case. Actually:

In this imagined case, there is no overall preferred outcome.

What do people actually prefer?

Polling data in the UK is consistent with this problem. Support for the three options is pretty evenly split, and even taking into account second preference, we are no clearer. Each head-to-head matches would be too close to call contests. 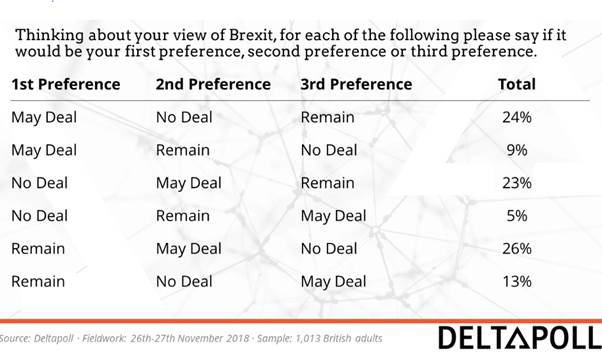 How is this relevant?

If means the UK, as a whole, DOES NOT HAVE A PREFERENCE and therefore there is no single “democratic” correct answer. Representative democracy, with parties and elections, has been our way of dealing with issues like this. Having a referendum on an issue with more than 2 possible answers just leads to nonsense, just as happened in the initial Brexit referendum.

The Brexit ultras who want No Deal can be seen as being driven by identity politics. This means that national identity is overwhelmingly important compared to economics. If you are a Remainer for whom Brexit is a matter of identity politics then for you then wanting a referendum is very logical. That is the only feasible route to Remain and anything other than Remain is a loss.

For economic pragmatists supporting a referendum is very dangerous. Remain is by far the best outcome but No Deal Brexit is catastrophically worse than any deal and avoiding a catastrophe is the most important thing.

For political pragmatists supporting a referendum is very dangerous. The result will be close and will not close the issue. There will not be any clearer sense of legitimacy for the outcome and after another 6-month campaign our divisions will be even more entrenched.

Should we have another Referendum?

As an ardent Remainer, you would think that I support another Referendum. But I do not.
Partly given the logic above, I do not think Referenda are consistent with our democratic system and thus a sensible way to resolve a complex issue like this. But also more pragmatically, I think Remain may struggle to win again and there is a good chance No Deal is the eventual winner; or even if Remain were to win, it would not be by a sufficient margin to close the debate.

This is the question I am most often asked and also the hardest one to answer.
I will try to provide a framework for the many overlapping threads:

To avoid it, one of the other outcomes needs to find a way to a majority.

Given that it would require more compromise from the EU, the EU is never going to offer anything like this and will not allow any renegotiation for this purpose.

A delay would need the unanimous agreement of all 27 EU countries, so it seems rather unlikely for them to do so.

If the options are so simple, why is it all so complicated?

The simplest answer is that this situation is unprecedented so there is no clear procedure to follow.
Here are some of the wild cards:

There is another important reason this is so complex. A lot of UK politicians do not understand the EU because they have never tried to. They really believe the EU can be forced to renegotiate. Talking to politically engaged people here, I get the sense that they are so engrossed in Westminster and party politics, they miss the point by assuming that important decisions are made here in the UK, without considering the viewpoint of our negotiating partner. I have previously used the example of Greece; if you misunderstand the EU then you play chicken and lose. Unfortunately, political journalists seem to have the same issue. They are obsessed with covering domestic political gossip here in the UK and so the coverage focuses on Westminster intrigue and the related confusion, whilst simultaneously missing the issues that are relevant.

I still think that the most likely outcome is that something close to May’s deal is agreed.
Perhaps losing the first vote will actually help her bring the rebels into line?