Ideally, we want to see:

A declining number of cases implies the Rate of transmission (R) is below 1 and gives some room to relax restrictions. A low level of cases is important because if the virus were to grow then it would be from a low level which gives time to adapt and reverse policies.

Let’s compare the growth and decline of the cases across countries and see if this supports the current policies.

Early-stage of the outbreak – up to mid-April

Looking at the initial stage of the outbreak, some countries such as Italy and Spain were unlucky in that they were the first to be hit and saw the first peaks. Countries such as the US and the UK were more fortunate in having a few weeks’ warning. Unfortunately, this time was squandered, and no effective measures were taken which we can see below, until by early April all countries have severe problems and are in some form of lockdown restriction.

(For the US I have taken the data excluding the New York area as this overwhelms the picture looking more like the Italy path.)

How effective have they been in controlling the virus? From mid-April to now

From the chart below, we see dramatic differences in how well countries have controlled the number of cases of the virus. All have managed to have some sort of decline but Italy, Spain and Germany have brought case levels far below the US and UK.

For Spain, Italy and Germany it makes sense to ease restrictions as they have done.

For the UK with a higher R and a much higher number of cases and therefore infections in the community, it would seem clear that we should not be following the same timeline of reopening as the more successful countries. As the Chancellor, Rishi Sunak, is quoted “the scientists on SAGE were very cautious” and we have witnessed many of them going public with their opposition to easing lockdown. The UK policy does not appear to be informed by science. It seems to be informed by the feeling that England cannot stay in lockdown while other countries are relaxing their restrictions. As Rishi Sunak went on to say, “somehow Greece and Italy are opening up”. The “somehow” implies that he has no grasp at all of the logic of why some countries can open up and why we are not yet there. This is a similar lack of understanding as Trump confused as to why one of his staff could test negative but “something happens” to cause her to test positive the next week.

Outlook once infections are under control

For countries that have the virus under control, the outlook is relatively positive. We still do not know exactly how much economic activity can be safely restored, but these countries have the best chance of finding a path to balance economic recovery with public health. Early indications from countries furthest ahead in the curve, such as Denmark, is that some important activities can be loosened without leading to spiking transmission. With a low level of infections, you can stagger the relaxation of activities which allows the effect of each one to be assessed. This means that if any future lockdowns are required, they can be more targeted, which has the desired public health impact but far reduced social and economic costs.

Outlook for US and UK 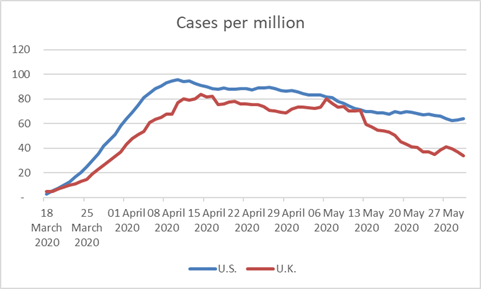 The outlook for the US and UK is very different. In the UK media, the US approach under Trump is highly criticised but it is not recognised how similar it is to the UK approach. The initial outbreak was not controlled even though they were weeks later than other countries, and furthermore the restrictions have not been as effective at bringing infection levels down. The UK has had more restrictions than the US and we can see has brought infections lower whereas the US remains not far below its peak.

The US and the UK are also following a similar path in easing their restrictions while the level of infections remains high. By relaxing lots of restrictions simultaneously it will be impossible to tell which ones have more of an impact. The optimism seems to be coming from the fact that other countries have managed to ease restrictions with the virus under control, so we can simply copy without having to go through the pain of actually controlling the virus first. We will see over the next few weeks how much impact our relaxations have on behaviour and spread of the virus. But it should be clear that the US and UK are in a far riskier situation than countries which only eased restrictions after the virus was much more fully under control.