Many countries are starting to move towards relaxing their lockdowns.  Across Europe, some restrictions have been lifted or dates to do so announced for the next few weeks.  In the US, despite starting lockdowns much later, there has been some relaxation already, including Florida beaches and shops in Texas.

This is as I expected, countries reached peak daily death rate around 3 weeks after the imposition of strict lockdowns whilst the clamour to end them builds.  We now see a lot of optimistic headlines and articles about the worst being over now, and how people are impatient to restart their lives.

Unfortunately, my read of the recent data is not so optimistic.

A key metric to look at right now is how rapidly the virus spreads during the lockdown.  We have initial data from the UK whereas Spain, Germany and Italy are 2 weeks further along.  In the last post, I estimated R0 of 0.8 during lockdown but this could be optimistic.  For example, in Italy the ICU cases have dropped from 4,000 to 2,800 in the last 2 weeks which has been hailed as a “dramatic drop” – actually a drop of 30% in 2 weeks implies a lockdown R0 of 0.85.  In the UK we are past the peak in daily deaths, but actual numbers remain close to it.  This may be caused by data issues, for example we know registering covid deaths can have a delay of a few days.  In Germany Merkel stated her estimate of R0 is 0.7 under lockdown, but every country will be different.

I will stick to my estimate of R0 under lockdown as 0.8 and now I want to make some projections based on relaxing lockdown (R0 rises) at different dates.  If we consider the R0 of the period when we were first trying social distancing (hand washing etc) to be 2 and given that it is currently 0.8, then it seems plausible that, upon some return to more normal behaviours, we can easily reach R0 of 1.3.  I will use this figure as post-lockdown R0.

Projection –  if UK ends the current lockdown on May 8th and R0 rises to 1.3 thereafter

Given the lag between infections and deaths, the initial 3 weeks after 8th May will look like things are under control – we ended lockdown and daily deaths keep falling!
A low of 164 daily deaths is reached on 25th May – but with the R0 at 1.3 (as discussed it could easily be higher) the deaths quickly rise again and breach the 1,000 level by 29th June.

What if we attempt another lockdown when death rate starts to rise?

Let’s say we relax lockdown for the month of May and restart it on 11th June, with R0 returning to 0.8.  We peak again at around 1,000 deaths per day, similar to early April.  This is a theoretical cycle that is sometimes mentioned in the press, we alternate 1 month of lockdown and 1 month in a slightly less severe lockdown. We would never get close to returning to the “hand washing” level of freedom and of course, we should not assume the NHS can keep functioning at this level of crisis indefinitely, given that most routine operations and scans have been put on hold.

What if we delay the end of lockdown until the start of June?

The low point of deaths and infections is pushed out and is much lower, with a low of 54 per day on June 19th.  However the power of compounding is relentless and we soar back into high infection rates by mid-summer.

What can we do?

This analysis is not very encouraging. I was hoping that R0 under lockdown would be far lower than we have seen, which would mean both that the rate of infections and deaths would fall more quickly, giving more headroom to relax the restrictions while still keeping the R0 close to 1.

This suggests that there is no easy way forward and that we are not on a path to progressively relaxing lockdown restrictions.  If a minor relaxation in lockdown leads to R0 of 1.3, then we merely have a short period until the pressure on health services increases and we return to more severe lockdown.

Are there reasons to be optimistic?

Yes.  This is not hopeless, but the key is to focus on R0.
One reason for optimism is my lack of access to accurate and detailed data.  Smart people, mainly in Germany, are doing high quality scientific work to understand the transmission of COVID-19.  If we better understand the transmission, then we will not need blunt tools such as lockdowns to reduce R0.  The rate of transmission, R0, is an average statistic; some areas will still have very high levels and so can be targeted accordingly.  I am sure we could find many current, restricted activities are less actually risky in terms of spreading and can be allowed to grow. Finding out what is driving the R0 to persist so high during lockdown is critical.

In my first post, I mentioned how sensitive the model is to small changes in R0, this is also reason for optimism.  If I run the model with R0 under lockdown at 0.5, rather than 0.8, and the post-lockdown R0 as 1.2 rather than 1.3 then the outcome is fantastically better. 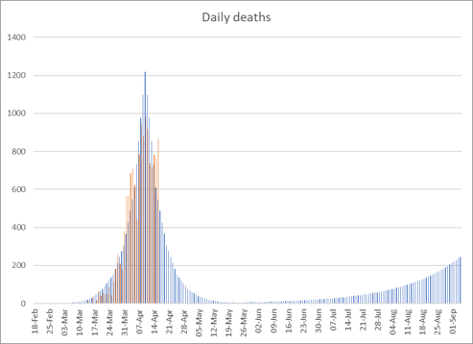 What will actually happen?

From what we have seen so far, we are likely to see wildly different outcomes in different countries.  Singapore and China brought down R0 using testing and contact tracing that many in the West would oppose as an infringement of civil liberties.  Without almost total compliance, the lockdown methods are far less effective, and the UK and US are certainly making only minimal progress in that direction.  In Germany, led by a well-liked, credible, smart leader from a science background, we have seen early imposition of lockdown and investment in scientific research that gives me confidence they will find a balance between personal liberties, economic activity and public health.  The US appears to have the worst possible leadership and political structure which will make containing the R0 extremely difficult.  The UK government has had a very bad start relying on herd immunity, ignoring building testing capacity, refusing to work with the EU and failing to prepare the NHS for the oncoming storm.  But the failures of the government have been offset by the public spirit and compliance to adapt to this awful situation and by the extraordinary response of the NHS workers.  There is always the opportunity for the government to learn from others and adopt better policies and find a path though this crisis.

One thought on “Can we ease the lockdowns?”